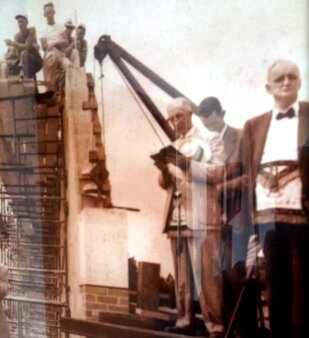 ​Quoting from the address of Grand Master W. S. Rockwell before the Grand Lodge of 1861: “We reflect upon the melancholy fact that thousands of our peaceful fraternity are now served by rabid fanaticism. It would be in the last degree ridiculous to maintain with so arrogant and pretentious a community as constitutes the United States of America now consolidated into a single, tyrannical and unscrupulous despotism, any official Masonic intercourse whatever.”

The Grand Lodge chartered thirteen Military Lodges in the Confederate States Army of which Military Lodge No. 1 of the Second Georgia Regiment. Worshipful Brother W. W. Boyd was W.M.

Address of Grand Master Lewis Lawshe of the Third Masonic District reported to the Grand Lodge of 1864: “From the situations of the Lodges of the Third Masonic District, it is impossible to give a clear report of their standing. Quite a number of them have lost their entire property – Charters, Jewels, Furniture, and Records, and in many instances, their buildings have totally been destroyed. The unhappy condition of our brethren and their families in the third District call loudly for our sympathies. Isolated as they are from us by the misfortunes of war, they suffer untold miseries and privations, that at present it is out of our power to relieve.”

From the report of D.G.M. Lewis Lawshe to the Grand Lodge of 1865: “The Third Masonic District has suffered losses beyond calculation. Lodge buildings, furniture, books, seals relics, warrants, – all have melted down before terrible reign of the sword and torch. While the blasting influence of war has laid waste to our fair country and especially that portion of it embracing the Third Masonic District, some things have transpired worthy of notice, to the honor of Masonry in the Federal Army. I desire to record the fact that, where it was in their power to do so, Masons, and Masonic property were protected and in some instances defended, by order of the leading generals.”