​From the “Masonic Messenger” December 2013:

​In 1843 Cobb County and the city of Marietta were barely 10 years old, still a frontier town with few permanent structures. In that same year Masons, working under dispensation, petitioned the Grand Lodge of Georgia and were awarded a charter to formally organize a Lodge of Free and Accepted Masons. On November 9, 1843, Kennesaw Lodge No. 33 began its long history with about 25 Masons, but frequent fires and a Civil War have left the Lodge with few records from the early years. “Why Kennesaw Lodge,” you may ask? Well, it was 45 years before the city of Marietta was founded and 123 years before the “Big Chicken” became a local landmark; Kennesaw Mountain was the predominant landmark and thus the name.

As Marietta grew so did the Lodge, they moved into the 3rd floor of a building on the south side of the square in 1850’s until that building was sold in 1910. When General Sherman occupied Marietta in 1864, the building was spared the torch because of its Masonic connection. The Lodge was however looted of all property, leaving precious little from the early years. In 1977 a book was received from Michigan with a note stating that the book was taken by their ancestor during the war and they felt it should be returned to its owner. The book is vol. 5 of The Universal Masonic Library by Rob Morris, the founder of the Order of the Eastern Star. What makes this book so special is that it is “Fraternally Dedicated” to Samuel Lawrence, a member of Kennesaw No. 33.

Samuel Lawrence, from the 1850’s until his death in 1890, was not only a prominent citizen of Marietta but the editor of “Masonic Signet and Journal” (adopted by Grand Lodge as the official organ), compiled Masonic Allegory and Masonic Lecture, also published several other books on Freemasonry and was considered the highest authority in the United States on Masonic jurisprudence. MWB Lawrence served as Worshipful Master of Kennesaw 33 in 1855-56, 1861 and 1866-1868, Grand Master of Masons in Georgia from 1869-1872, and Grand Secretary in 1873. His leadership carried the Grand Lodge through the very difficult years following the Civil War.

The years following the Civil War were difficult for Georgia and the lodge suffered accordingly. The 20th Century brought renewed hope and with it dramatic growth for Marietta and Kennesaw Lodge. Many of the movers and shakers in business and politics became Masons; lodge membership grew from 183 in 1914 to 400 in 1927 with men from all walks of life, helping to make the lodge the place to be on the first and third Friday nights. Most of the prominent family names in the city and county appear on the membership rolls of the Lodge, one name many of you may recognize is Steadman Vincent Sanford. Brother Sanford served as secretary of the lodge as well superintendent of the Marietta City School System before going to Athens to become the President of the University of Georgia and later Chancellor of the University System of Georgia. It was under the leadership of Dr. Sanford that sports became such a tradition at UGA; he also was a big part of the formation of the SEC. So next time you are “between the hedges” at Sanford Stadium you can thank a Lodge Brother from Kennesaw No. 33 for the pride you feel for the home team and that great Saturday fall football tradition.

Kennesaw No. 33 has recommended that charters be issued to constitute new lodges where needed; one such Lodge was Pythagoras Lodge No. 41 in 1844 in the city of Decatur. They were also instrumental in forming the Cobb County Masonic Convention which continues to meet annually. The Cobb Convention was first to furnish a room at the Masonic Home in Macon. Its members have also answered the call to service in every conflict of this country since the War with Mexico and have members serving today in the military. Service to community and craft have long been the trademark of Kennesaw No. 33. Our members have served as mayors, pastors, local and state politicians, business men and almost every sheriff including the current sheriff of Cobb County, Neil Warren. Kennesaw Lodge has provided Freemasonry in Georgia a long list of men who have served in leadership positions at all levels of the craft, from the men who saw to the financial and long term security of the Lodge through the formation of Marietta Masonic Temple Company Inc. to a Grand Master, York Rite, Scottish Rite and every appendant body in the state.

When the building on the square was sold in 1910 the lodge met on the 3rd floor of Marietta City Hall until the current building was constructed in 1952 and dedicated in 1953. These years saw an incredible growth in the lodge, a population shift to the area, Lockheed brought men from all over the country and Post-War desire for that comradery helped to swell the membership to over 1200 men. It was during this period that night shift workers, mostly from Lockheed, formed Samuel S. Lawrence No. 721 that met on Saturday night so they could attend lodge. Order of the Eastern Star, Rainbow Girls, DeMolay and the York Rite Bodies have all been sponsored or hosted by the lodge; all continue to meet in the lodge and are doing well.

On November 9, 2013 Kennesaw Lodge No. 33 celebrated its 170th anniversary with an open house to the public. With over 100 people attending the event which included a Historical display, a proclamation read by the Hon. Tim Lee of the County Commissioners Office, a tour of the lodge that was set up for a meeting, speeches delivered by several of the Past Masters, a Q&A session with refreshments provided by Marietta Chapter No. 208 of the Eastern Star, even a descendant of Samuel Lawrence saw the article in the newspaper and wanted to come. The response of the public was very positive. Many had no idea of all that we do in the community and the major part we hold in its history. With all the TV shows and movies about Freemasonry we had to assure the visitors that the only treasure we have is what we have to offer to the men who join our fraternity and we can put no intrinsic value on that.

We are proud of our long history at Kennesaw No. 33; each generation of Masons in the lodge has celebrated their part of that longevity and commitment to the Craft. We have young men knocking on the inner door who desire to learn what we have to teach and they will carry on our tradition and heritage as we did for those who came before us. We invite you to join us on the 1st and 3rd Tuesday nights and become part of our history.

Records from the Grand Secretary 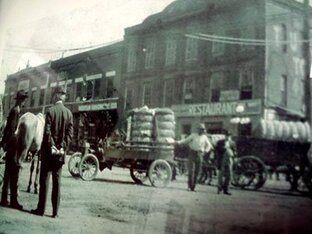 ​The following information has been copied from the records of the Grand Secretary with a view to completing, as near as possible, the history of Kennesaw Lodge all records which were destroyed by fire on May 11, 2011. Our only source of information was from the proceedings of the Grand Lodge which, so far as Kennesaw is concerned, is limited only to the returns as submitted annually.

During the year 1843, twenty-five members were initiated, passed and raised; one affiliated and three “resigned” so that the above roll cannot be taken as a list of charter members.